Technology and Religion and Steve Jobs 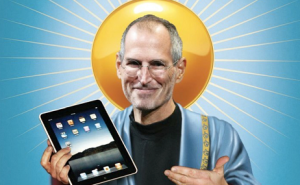 Technology and religion are interconnected in ways more than one. Apple is indeed a religion because after its inception it has managed to gain a huge group of loyal or die-hard followers who are also known as ‘cults’. Apple customers are extremely devoted to Apple products, thus making the competitors fume with envy! Brett Robinson, the author of the ‘Appletopia’ book takes a look at how Steve Jobs used religious iconography and metaphors like “Bite that Apple” (reference to the Forbidden fruit from the holy Bible) for elevating his products.

Steve Jobs, the founder of Apple, was known to be a faithful devotee of Zen Buddhism and Eastern spiritualism. According to Robinson, who is a visiting professor at the University of Notre Dame and Mendoza College of Business, Apple has connected technology and religion right from the beginning in all aspects, including its marketing propagandas. In fact, the logo of Apple is a reference to the Tree of Knowledge and the Garden of Eden.

In the ‘gospel’ of Apple, knowledge does not cause a downfall but rather liberates and enlightens. The 1984 Super Bowl Advertisement of Apple is an iconic one wherein a female runner hurls a hammer at an Orwellian figurehead, smashing it and creating a flaming explosion while the onlookers or drones are immersed in bright light and they seem to become enlightened.

Steve Jobs was intelligent enough to figure out that technology and computers are made for people and it should remain that way. He was able to convince people that Apple products can transform their lives in a big manner. Thus, Jobs does not draw on features like RAM details or other technological jargon in advertisements but he attracts consumers via advertisements with feelings.

No doubt Apple is a cult company, even Jobs agree but he does not take it too seriously and recommends drinking the ‘Kool-Aid’, i.e. to take it with a pinch of salt! Apple company hires ‘evangelists’ to spread its word and promote its products in order to attract more ‘cults’.